If you only go to Shifen for lanterns, you are missing a lot

I was intrigued by the Pingxi Rail Line during my research of day trips from Taipei. It has a historical aspect and it travels through many picturesque towns. The Pingxi Rail Line was a railway built mainly to haul coal from the area of Jingtong down to the coast by Keelung. Instead of abandoning the line when the coal mines closed, the Taiwan government keep it going and now it has turned into a fun tourist experience.


Most tourists start at the Ruifang train station and take the Pingxi Rail Line west toward Pingxi or only to Shifen and do the lantern thing. The Pingxi Line ends at the town of Jingtong.  I took the Taiwan Tourism Bureau suggestion and started in Taipei on the Taiwan Tourist Shuttle bus to catch the train at Jingtong. From my Taipei hotel, I hopped on the brown MRT going to the Taipei zoo and got off at the Muzha Station.  The  Taiwan Tourist Shuttle bus stops near the Muzha MRT station.

How to find the bus: As you come down the escalator at the station exit, turn left. You will see a diagonal street that goes under a bridge.  Take it to the stoplight.  CROSS THE STREET and turn right a little to get to the stop for bus 795 going to Pengxi. For the bus fare, use your Easy Card.

For some reason the scheduled times the bus leaves from the station are not at constant intervals. I missed the 7:15 am bus and had to wait an hour for the 8:20 bus and since this was rush hour of people going to work plus tourists it was standing room only for about an hour on the bus until Jingtong. My suggestion is if you want to leave in the morning, get one of the earlier buses, e.g. 6:20, 6:50, or 7:15. 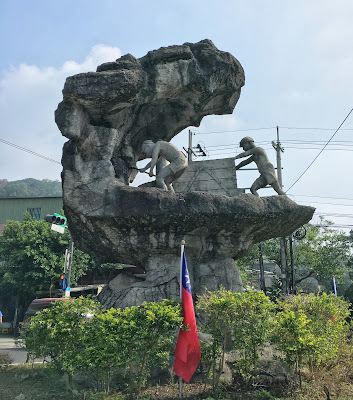 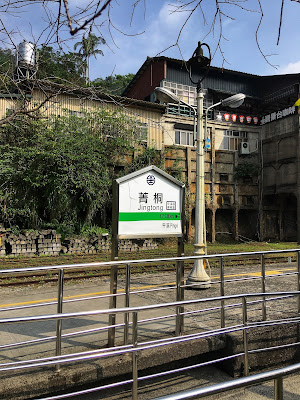 I choose to get off at Jingtong to see this former coal-mining town and catch the Pingxi Rail Line train here. Jingtong is the terminus stop of the Pingxi Line. There are at least three ways to purchase tickets for the train once you arrive at Jingtong. You can use the Easy Card as you enter and exit at each stop, buy a single-use ticket to the station you wish to go to, or buy an all-day hop-on-hop-off pass for NT$80. Which is what I did. The all-day pass will give you the flexibility to stop and get off at the other interesting towns on the line. 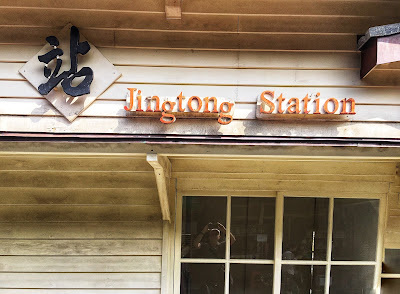 Jingtong has a small and quaint old street and when I was there in the early morning there were only a few tourists. Up the hill behind the station is the Coal Mining Memorial Park with an old sealed off mine entrance. There are many cool derelict buildings that were used during the coal mining days that make for good selfie backgrounds. 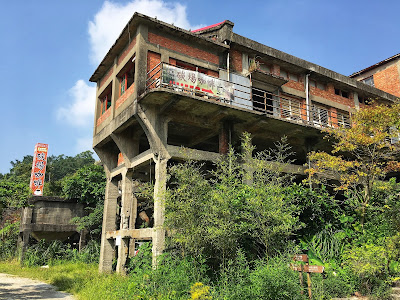 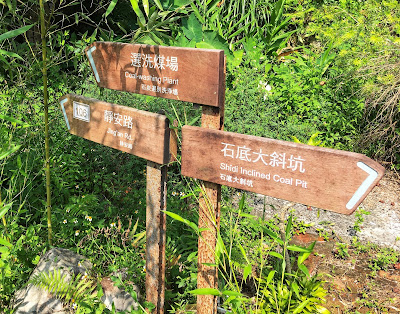 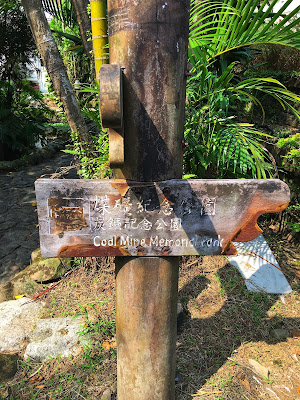 The next stop on the line is the town of Pingxi. Pingxi also has an old street downhill from the train station. There are your usual snack food and tourist souvenirs. Walk up to the Guanyin Rock Temple and see the bomb shelter and Eight Spirits cave. Pretty thrilling to have bats flying around you in the cave! 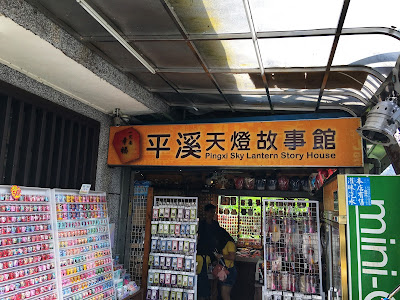 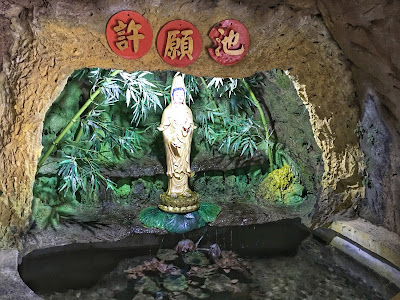 The next two stations Linjiao and Wangu people tend to bypass because they want to get off at Shifen. There is, however, a newer bike/walking path along the Keelung River between Pingxi and Linjiao. 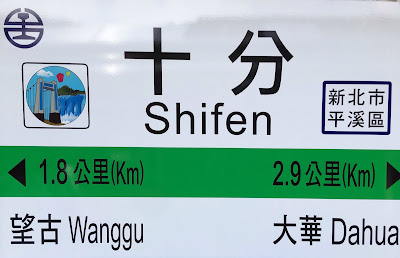 Shifen is the tourist mecca because everyone wants to send up good luck sky lanterns. So after the train leaves, people purchase the lanterns, write messages on them, have their picture taken, let the lantern go, and then get back on the next train.


There are many snacks that can be had along the tracks. If you walk up the Shifen Old Street as it curves to the right you will come to a local minced pork lunch place. Cheap, good and a great local experience.

Another stop on the Pingxi Line is the Houtong Cat Village. Probably one of the cleverest marketing gimmicks in Taiwan.  Who doesn’t wasn’t to see a cute cat? The town is also home to the Coal Mine Ecological Park where you can learn about this former Taiwan industry.

There are also many hikes from these towns (most vertical), but some to waterfalls.  Pickup Richard Saunders’ book Taiwan 101 when you are in Taipei to learn more about the trails. I know Eslite in Taipei carries it.


When my Pengxi line train stopped at the Ruifang station, I transferred to a train back to the Songshan station in Taipei. This was an easy day trip from Taipei. Go early if you want to avoid the large crowds. All Aboard Taiwan!

Taitung to Tainan - Through the Mountains

I am now on my fifth day around Taiwan.  I am now leaving Taitung and going to Tainan.  I have decided to skip Kaohsiung, Taiwan’s largest city in the south since it is very spread-out and will take some time exploring. Tainan, however, I have heard many good things about and I am looking forward to at least exploring the tip of the iceberg.

If you look at a map of Taiwan, you will see that Tainan is almost directly across from Taitung.  Taitung is on the east coast and Tainan is on the west coast in southern Taiwan. On the map you will also see that there is a mountain range between the two cities. The best transportation route to the west coast from the east is on the Taiwan Rail Administration South-Link line. I had purchased the ticket earlier to make sure I had a seat on the train.  The 2nd class section of the train was more than comfortable. Because of those mountains, the train went through many tunnels.  I didn’t count them all, but it was a lot.

We made a stop in Kaohsiung and then continued to Tainan. Arriving at Tainan, I got out of the train station and saw my hotel (Shangri-la Plaza Hotel) on the other side of the tracks. Knowing there must be an easy way to get across, I finally found the tunnel in front of the station that goes under the tracks to the other side. Shangri-la Plaza hotel was so very convenient being so close to the train station. I did arrive a little early for check-in, so I went to the Plaza mall food court for some lunch. After a leisure lunch, I went back to reception and my room was ready with the luggage brought up. I had a large room with the typical amenities, but the carpet has seen better days. I was so grateful for a cool space though.  The heat in Tainan was stifling.

I only had part of a day in Tainan, so I wanted to hit the main attraction which to me was Anping District and what’s left of the Dutch fort Zeelandia. Getting there was easy from the Shangri-la Plaza hotel. Bus 77 stops in front of the hotel and the stop to get off was the Indigenous Culture Center. With a short walk across the canal, I was at the Anping Old Street. Cool food and snacks abound and they cater to all the tourists’ needs. After turning right at the Matsu Temple, I was at the old fort. Not much is left now so it is hard to imagine what it looked like when Koxinga attacked it and drove out the Dutch. The trees in this place are amazing and I got to see the sunset. 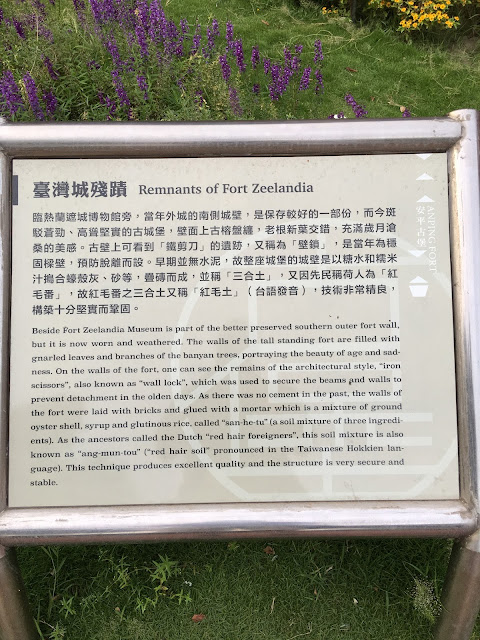 I took the same bus back to the Shangri-la Plaza hotel. From my quick tour through Tainan City, I can see it is a fun place with food and many historical places. Definitely a place to come back to. Now I just need a find a cool month to visit.
Posted by Thomas at 11:02 AM No comments: